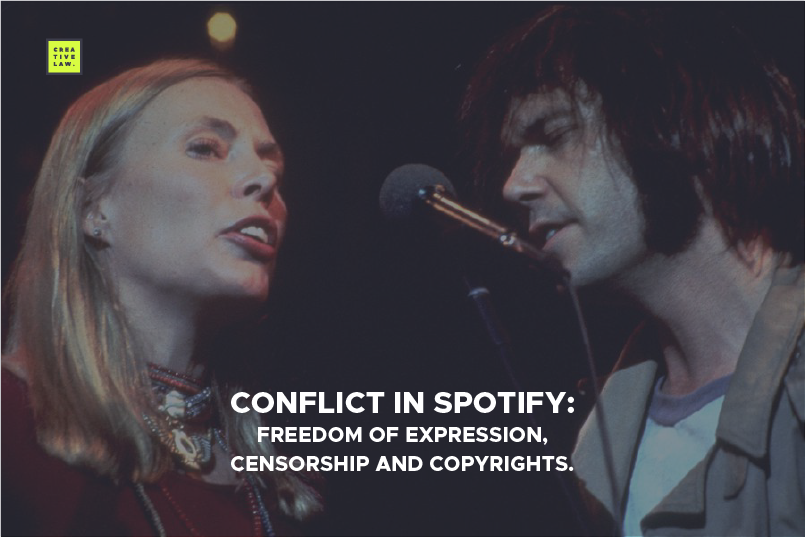 Five artists have publicly announced in recent days their departure from the Spotify platform in support of Neil Young, who clashed with the company over the content of one of the podcasts it offers, starring Joe Rogan, which would spread misinformation around to the Covid-19 vaccine.

A few days ago, comedian Joe Rogan touched on the subject of Covid-19 vaccines in his podcast “The Joe Rogan Experienced” on the Spotify platform, which has 16 million monthly listeners on the Swedish platform. In the chapter in question, he defended his statements and his decision to receive two doctors who were self-proclaimed vaccine skeptics, whom he called “very credentialed, very intelligent and experienced people.”

The reactions to this delicate topic were immediate, and one of the strongest was that of the musician Neil Young, who, faced with his outrage against Spotify for allowing part of its content to provide “misinformation” about the Covid-19 vaccine, 19 announced that his music would no longer be part of the platform’s catalog.

Young’s departure caused a domino effect among his colleagues, who wanted to join this boycott against the platform by also removing its musical content, including Joni Mitchell and Crazy Horse and E Street Band musician Nils Lofgren.

Other figures have tried to join them, such as David Crosby, a former traveling companion of Neil Young and Graham Nash, although he himself declared that he has managed to join the campaign. The reason? The artist, like many of his fellow professionals, does not own his own catalog and cannot make decisions alone about where his discography can be or not. “I no longer control it (my catalog) or if I had not supported Neil,” Crosby explained on social networks when asked by a user. But behind that brief answer hides the equation under which the music industry currently operates, along with the reason why it is difficult for other great artists to join the boycott against Spotify.

“Most artists simply don’t have the legal right to remove their music from one streaming platform or another. In fact, even Young had to rely on the goodwill of his record label, ”says the specialized site Pitchfork in an article published this week, based on the first major controversy in the music industry in 2022.

As the report points out, even Neil Young himself had to expressly request and reach a prior agreement both with his label (Warner) and with the company that controls 50% of the publishing rights of his catalog, Hypgnosis, before publicly announcing your decision. For both companies, the Canadian’s determination to remove his discography from the most popular streaming platform in the world, with more than 300 million users, represents a problem and a decrease in their income.

“Before I told my friends at Warner Bros about my desire to leave the Spotify platform, I was reminded by my own legal team that, by contract, I did not have control of my music to do that,” Young acknowledged on his website. 26 of January. “I want to thank my truly great and supportive record company Warner Brothers-Reprise Records for supporting me in my decision to get all my music off of Spotify,” he detailed.

Spotify also issued a statement via a public letter from the company’s CEO and founder, Daniel Ek. “We know we have a critical role to play in supporting creator expression, while balancing that with the safety of our users. In that role, it is important to me that we do not assume the position of being a content censor while, at the same time, ensuring that there are rules in place and consequences for those who violate them,” he wrote. Those rules include the first-time posting of platform rules and a content warning to any podcast that includes a discussion of COVID-19. The warning will direct listeners to a hub that “provides easy access to data-driven, up-to-date information as shared by scientists, clinicians, academics, and public health authorities around the world.”

The Los Angeles Times added: “As admirable as Young’s putting principle before profit is, he is risking less than many of his peers would. He has never really needed Spotify, since he only gets 10% of his revenue from the service. Young earned even less from Spotify after selling half his music catalog for a career-best $78 million last year (ranking him 11th highest-paid musician in the world). .” And, among other concepts, he adds: “Unlike recorded music, which is hampered by a tangle of agreements between singers, songwriters, producers, record labels and copyright holders, podcasts tend to be simpler and more profitable. In most cases, the big names get a flat fee and that’s it: no pesky royalties or renegotiation to pay. Podcasts can live on a platform in perpetuity and are quite popular with advertisers, generating $1 billion a year in ad revenue in the United States.”

Chile, the most innovative economy in the Latin American region according to the Global Innovation Index 2021.

The Comptroller’s Office requests a report from the CNTV regarding the broadcast of “La Jauría” on Amazon Prime before on TVN despite being financed with public funds.

The streaming race: the financial value of intellectual property.